Down at ‘moone’ (world at the bottom of the sea), Bakewa (the brother of Tabwakea) and his wife Nei Wiriki also had three children; Bakoauea (king shark), Bakoaun (killer shark) and the youngest Na Atia. Bakoauea later married and had a son named Na Tababa (tiger shark). Bakoaun did the same thing and had two sons Na Rokea (pointed snout shark) and Na Anoi (hammerhead shark). Na Atia married to Nei Kereboki and had two children - a boy Towau and a girl Takabure. 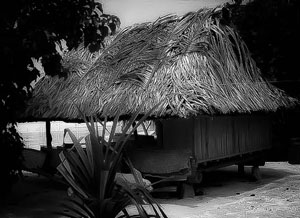 Since birth, Towau and his sister Takabure were raised separately in different huts specifically built for each of them and which were located behind the village. Their mother would only visit them for food, baths and other basic needs. The children were restricted from seeing each other. However, as they grew up, they committed incest; seeing and sleeping together secretly – a practice that was culturally very unacceptable cause it brought shame and condemnation onto everyone in the family. Not long, Takabure became pregnant so their incestuous affair was finally known by their mother whom reported to her husband. When Na Atia heard about this, he got really mad with his children. He had no choices other than informing their grandfather Bakewa. Upon hearing this, Bakewa ordered that he himself would kill his grandchildren as a penalty for such a crime.

When Towau and Takabure heard of Bakewa’s death plan, they felt really scared so they escaped before his arrival. Both ran all the way to Samoa to hide there. As they appeared up on the water surface, Takabure finally gave birth to her first child, te Aong. As they swam further towards the island, she bore a second child, te Awai. Just before they reach the shore, she bore her third child, te Ingo. They hadn’t any idea that the spot they waded up at was Tabwakea’s home. Their uncle Tabwakea never wanted to see their faces because he knew that they had been condemned of ‘karikiraa’ (incest) therefore he left the house just as the children arrived. Tabwakea then chased and forced them to live at the southern end of Samoa. Towau and Takabure therefore built their houses and lived there. After a while they had two more children, girls - Nei Taia and Nei Taina.

Nei Taia and Nei Taina were raised again inside different huts meant for each of them – much like how their parents had been raised. The only difference was this time, the father Towau took care of Nei Taia while her sister Nei Taina was being cared by Takabure. That way, the girls grew up inside their huts. In addition, they were neither allowed by their parents to go out of their huts nor were allowed to see each other. A wall made from coconut leaves was placed between their huts to prevent them from either seeing or visiting each other.

One day after their parents left, Nei Taia went out of her hut - despite being forbidden. She was bored and would ask her younger sister if she could get out and play. They would do the popular leisure activity of young women called the ‘kikineuti’ – combing of the hair. Nei Taia called her sister, “Hey, come out and let comb each other’s hair!”

Nei Taina refused go out of her hut for she was afraid to do so. She knew the rules - they were forbidden by their parents. But Nei Taia kept calling and asking her sister to get out. At last, Nei Taina got out and went over to her sister’s hut. At her sister’s hut, Nei Taina was surprised to see that the ‘roki’ (curtain) had been woven from the finest ‘wau’ (skinned coconut leaves) while hers was just a hanging old ‘inai’ (coconut mat). She was also amazed to see better food inside her sister’s ‘abein’ (basket of food). Nei Taia’s foods were fresh and delicious while on the other hand hers were old and mostly remains and scrapes. She came to realize and was certain then that her sister was being favoured by their parents. They loved Nei Taia more than they loved her. For this, Nei Taina refused to eat any of the food being offered to her by her sister – she felt sad, jealous and hated their parents.

The combing of each other’s hair in turns began. It was Nei Taina’s turn first and she enjoyed it very much. Then when it was Nei Taia’s turn, Nei Taina combed her sister’s hair so gently that she finally fell asleep. Slowly, Nei Taina stood up and started walking away. She had decided to leave her home for good because she knew that she was not loved as much as her sister. Her sulky feeling forced her to leave and never to return. When Nei Taia woke up, she saw what happened so she ran after her sister asking her to come back. She tried to persuade her but Nei Taina never listened.

Soon their father came. After being informed of what happened, Towau only asked Nei Taia to get back into her hut otherwise the sun would ruin her light skin; “It’s okay, just get back into your hut.”

literally: (“I swim, I swim eastwards. I swim, I swim westwards. I’m calling the name of my grandfather Bakewa, down below. Where are my uncles Na Tababa and Na Anoi. For I couldn’t sleep, for I am dying!”

Bakewa told Na Anoi to quickly go and assist the lady who was calling from above. At once, Na Anoi rushed off. He lifted Nei Taina and put her on his back. Bakewa told Na Anoi to take Nei Taina to the island of Tarawa, “I aki tikitiki mani mweremwere ngai O! Bwa I tabe ni Katanga te bu iaon moone i nano ikai, ao I kakima ao I kabanea, I tauia Na Tababa ma Na Rokea, ao I kanakoa Na Anoi bwa e na rewekaiko nako be na nikiriko n te bike are i eta ao ko a roko i Tarawa nee!”

literally: “No tension, no stiffness! For I was blowing a horn down here, to let everyone come together. I am holding Na Tababa and Na Rokea and sending Na Anoi to grab and take you to the island of Tarawa”

Na Anoi took Nei Taina to the island of Tarawa. There Nei Taina met and married Taninganikauongo and lived happily together.